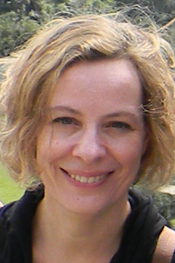 Isabelle was born in Paris, France, but she went to live near Versailles, where she grew up amongst the forest and fields of the French countryside. She returned to Paris a few years later to study. She spent a number of bohemian years in the amphitheatres of the prestigious Sorbonne and cafes of Saint-Germain and gained a Master’s degree in Philology (LCE: Langue et Cultures Hispaniques) in 1993. She was devoted to teaching Spanish in France but Castilian  was not her mother tongue and so she decided to come to Spain to absorb the living language.

She came to Barcelona in 1996.  Although her original plan was to stay only for six months, she fell in love with the city, its climate, its people, its streets, its neighbourhoods and stayed. She gained a Master of French as a Foreign Language (FLE) in 2002 and began her teaching career at the Institut Francès of Barcelona (2002-2006), then entered ESADE Executive Language Center (2006-2013) and when closed, she joined NELC. She has worked for a university of tourism attached to the University of Girona since 2013 and for the Col·legi of Economists of Barcelona since 2014.