British English vs American English, or the Two Faces of Learning English 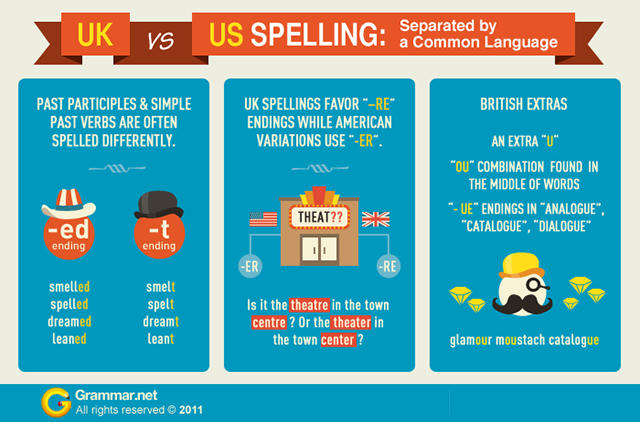 Do we write neighborhood or neighbourhood? And don’t we say lift instead of elevator? Haven’t we seen to let signs in London estate agents but on holiday in New York, the signs said for rent? Is it just me or does trying to learn English sometimes drive you a little crazy?

We have good news. It’s not just you.

As in most cases, each language has regional variations. This doesn’t mean that one is good and the other is bad; they are simply different. So far, so good.

Now let’s look at some of the most common differences between the forms of English that are spoken in the UK and in the USA. Don’t forget that in addition, if you travel to Australia, Canada, New Zealand, South Africa (and a few more countries), you’ll also come across differences between the form of English you have studied and the form that the natives speak. Of course, this doesn’t mean that you won’t understand them.

One of the biggest differences is the vocabulary. For example, a British person eats biscuits whereas an American eats cookies. In Britain, you can get a takeaway from a restaurant but in the USA, you get a takeout. While Brits go on holiday, Americans take a vacation. Every time you’re at a bus stop or in a supermarket, the British join a queue but the Americans stand in line.

The spelling also has its differences. For instance, in British English, a lot of expressions are written with ISE whereas the American version uses IZE: organise vs organize, analyse vs analyze, civilisation vs civilization. On the contrary, some British nouns are spelled with ENCE whereas Americans use ENSE: defence vs defense, licence vs license. These clues can tell you where the writer is from.

Of course, there are also grammatical differences. In speaking, the British use the present perfect tense with adverbs like yet, already or just. However, Americans can correctly use the past simple tense as well: British English ‘I’ve already had lunch’ or ‘I haven’t received the letter yet’; American English can also say ‘I already had lunch’ or ‘I didn’t receive the letter yet’.

Yet another difference relates to collective nouns, such as team, committee or government. In British English, the verb depends on whether the noun refers to one whole group or to the individuals who make up the group: My team is winning vs. The other team are all sitting down. However, in American English, these nouns always take the singular form of the verb: The committee hasn’t reached a decision or The government is investigating the situation.

More differences pop up when we use that common group of words, technically known as delexical verbs, but also known as ‘empty verbs’: have, take, give, make. These words have little meaning in themselves so it’s the noun or expression that gives the meaning. Only in these cases, British English tends to favour certain expressions, while American English has a preference for others. For example, in the UK, we normally have a bath or have a nap but in the USA, you are more likely to hear take a shower or take a break.

Times can also present problems. For 10.15, the British might say a quarter past ten while for Americans, it’s a quarter after ten. A quarter to ten is an entirely different time (09.45), which in some parts of the States, is referred to as a quarter of ten. We can see where the confusion might lead. We need to forgive the anglophones for not thinking of those of us learning English as a second or third language.

All in all, these examples are just a small sample of the differences between two variations of the same language. If you’d like to study a little more about the subject, the following links could be useful:
Spelling differences
Vocabulary differences

As George Bernard Shaw said: “England and America are two countries separated by a common language.”